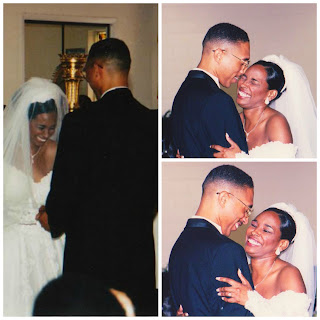 August 29, 1998 I married my husband Jon.  The thing I remember most is that Jon and I laughed almost the entire time we were exchanging vows. To the point of being speechless. A friend remarked, "Well, that was the most fun I have ever had during a wedding ceremony!"  Since  we have been through things that have destroyed the best of marriages.  We have lost a child, journeyed through my deep long depression together and lost pretty much everything we owned.  All while simultaneously raising three children, two who had special needs at the same time.  There have been lost jobs, lost dreams, lost friends and lost time, but I can honestly say that not a day has passed where I have had to second-guess his love for me.  Even during the times when I was least myself.  I thank God everyday that I am married to an extraordinary man.

1.  We still laugh together
2.  He still looks at me as if I am the most beautiful woman in the world
3. I still feel shy and goofy when he does
5. I have never had to shrink to make him feel big
6. He never fights just to be right
7. He is a grown-up and a big kid all at the same time
8. I don't have to pretend to agree with him
9. Every aspect of who I am is safe when he is around
10. He has never asked me to be anyone other than who I am
11. His love and care for his children is evident and consistent
12. He is brilliant and knows it
13. He still turns women's heads and I love it
14. He knows that there is no one on earth who believes in him more than I do
15. I still have to catch my breath around him
16. Everyday the kids act like it is Christmas when he walks through the door
17. It's adorable that he thinks he is smarter than me...wink
18.  He has never let me down, even when I had to trust him with my life
19. I have no doubt that he will get all he wants out of life, even the stuff he thought he gave up
20. He is the only proof I need that there is a kind and loving God that wants the absolute best for me

I knew my life, no matter what, was going to be exactly what it was supposed to after Noelle was born and Jon held her for the first time.  It was several days after she was born and one of her first times out of her Giraffe incubator. He could practically fit the entire length of her less-than 2 pound body in his hand.  We were warned that she would probably respond little to our touch and voice.  Jon leaned over and whispered, "Hey baby..." and she opened her eyes and smiled.  The nurses said her smile was her little muscles re-flexing.  But we knew differently. From that moment on, Noelle smiled every single day her daddy cradled her in his big hands and whispered "Hey Baby" in her ear.

That kinda sums of the reality of the Poindexter Household.   Daddy speaks and we all smile.